Ona began in 2015 with the question of how to make a celebrity as part of an art practice and the desire to self-appropriate her celebrity image. In 2019 she has 3 million followers on Instagram, has released her debut album, created a body of visual work, and monetized via a personal website and Snapchat. Set to conclude in 2020, she has provided an exploration of mainstream media, the celebrity system, and what is and isn’t allowed in female presentation and in art.

Many of the artworks created in this time use images of Ona as the base.

Writings related to Ona
On Instagram Celebrity and Female Representation in Rhizome
Thoughts on Me Too in The Huffington Post
Self-Made Supermodels in The Wrong Digital Biennale. 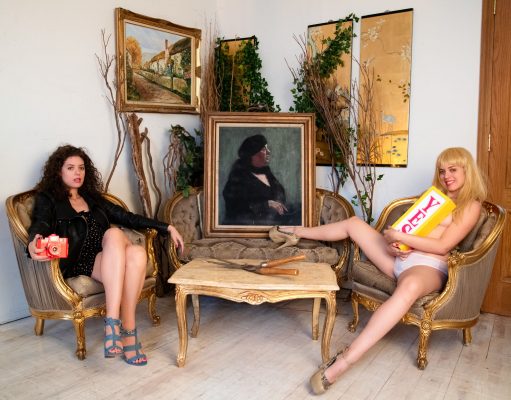 “There are few singers and artists who are so unique, so individual, so highly talented that they’re known by just one name. Beyonce. Picasso. Madonna. Prince. Perhaps it’s time you add another name to that list: Ona. She’s both a singer and an artist. And as you’ll see on her Instagram or hear from her songs on Spotify, she’s a singular talent. So, let’s start your weekend off right: do yourself a solid and enjoy the undeniable sexiness of her one woman self-made photoshoot.” – Playboy

“ONA — an objectively stunning woman who has worked her angles into hundreds of thousands of dollars, millions of followers, and a viable independent career. While the paparazzi may not be camped outside her Brooklyn, New York apartment like a traditional celebrity, ONA is certainly famous by 2018 standards…. Of course, this life does not come without sacrifice. Living publicly as a SW has seen everyone from family members to former classmates weigh in on her lifestyle… While it seems like movement to reclaim female sexuality is progressing in leaps and bounds, there’s still a long way to go, ONA asserts, but she is more happy to be in the trenches. PAPER caught up with the model to talk sex, more sex and rock ‘n’ roll.” – Paper

For works prior to 2014 please email leahartstudio @ gmail . com for access.

A selection of works is viewable in the main menu items as highlighted sets.

You can also view works by series.

Works are censored for display on the web.

All works are heavily downsized for display on the web.